The Mayan Culture in Chichen Itza

One of the documents that compile Maya knowledge of specific regions, the Chilam Balam, mentions that the Itzaes, inhabitants of Chichén Itzá, were "the last dominators", and focuses on who was the owner of those lands; raising the question of whether they "arrived" or "were created". 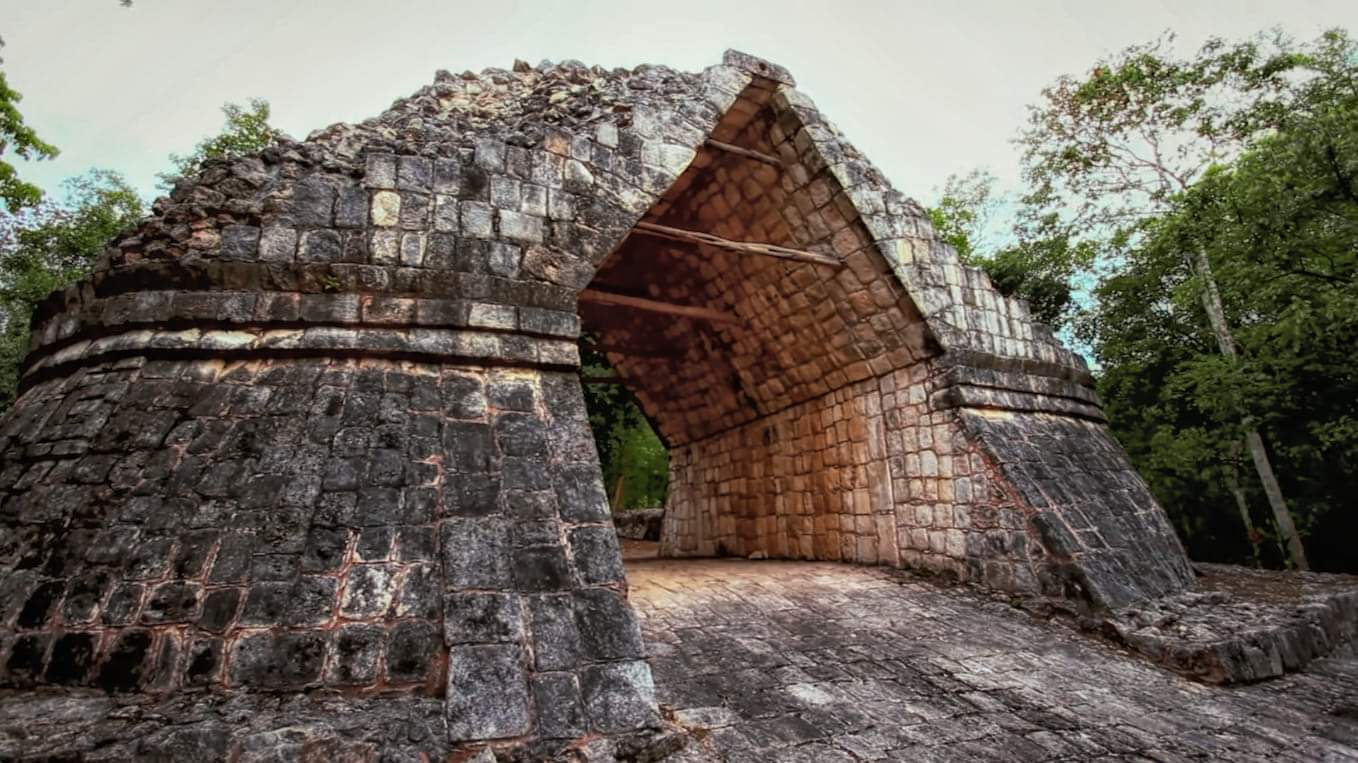 The area is known by archaeologists as "Old Chichén" shows what life was like before the military splendor of Chichén Itzá.

It is remarkable how Maya cities used to have a nucleus where there were palaces and kings lived. Particularly, Chichén Itzá has roads that connect its buildings to each other. In "Chichén Viejo" there are buildings that demonstrate the architectural arrangement of constructions with a patio gallery on a second level. To achieve these constructions, it was necessary to have knowledge of architecture, construction systems, and the loads supported by the walls and columns. Once this engineering work was mastered, new arrangements and spaces with new functions emerged.

The decorations that look like grids mark the area where the elite lived. In some constructions, the representation of warriors can also be seen. 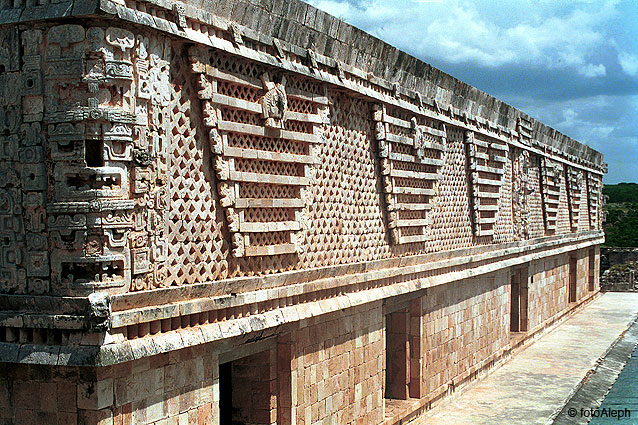 Something curious is how certain families produced certain stone groups. For example, representations of ticks ("pech" in Maya) and spiders ("am" in Maya") can be seen near the living areas. 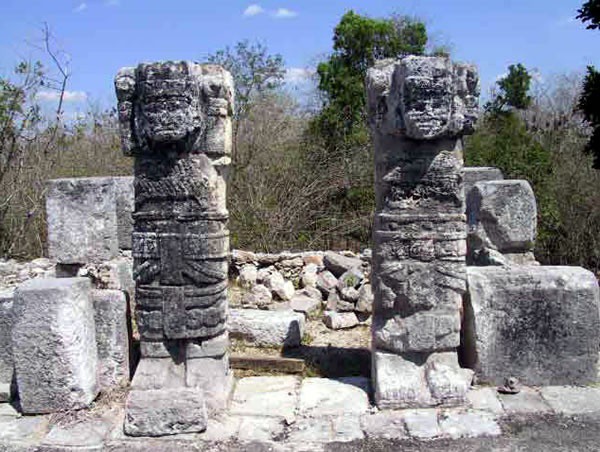 Some palaces of "Chichén Viejo" have bed bases that, at the time, were covered with cotton or mats. In some patios, there were basic cooking activities; and there are rooms all around. 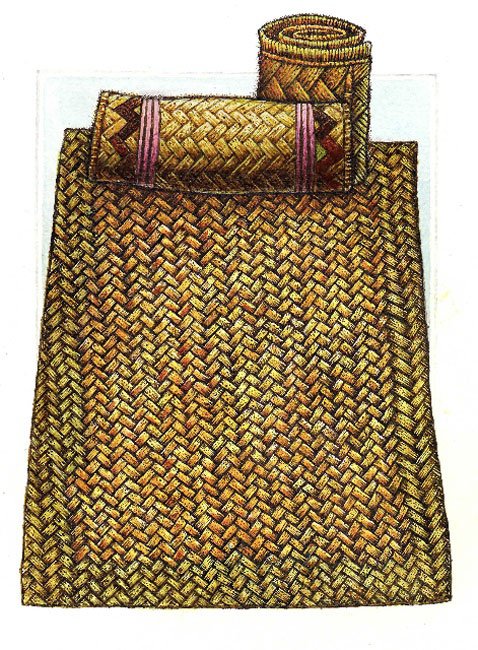 Maya architecture is exuberant, except in the Akab Dzib construction, which shows austerity of forms, standing out for its simplicity. Akab Dzib literally means "stone-carved at night", and its glyphs can only be interpreted thanks to the shadows of the night that make it possible to read them. It is worth mentioning that in Maya art, what can only be seen in darkness and shadows also has meaning. 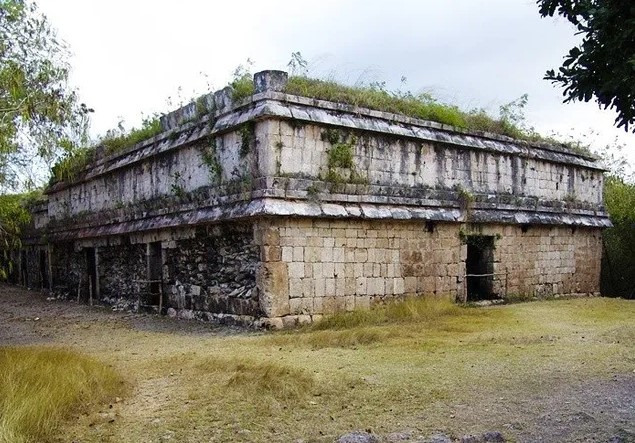 It is considered that the exploration of Chichen Itza is still at 50% or 60%.

One archaeological figure recognized for his work is Sylvanus Morley, who was part of the Naval Intelligence Organization (predecessor of the CIA) and was also entrusted by the Maya peoples. Some suggest that he could be the inspiration for the character of Indiana Jones. 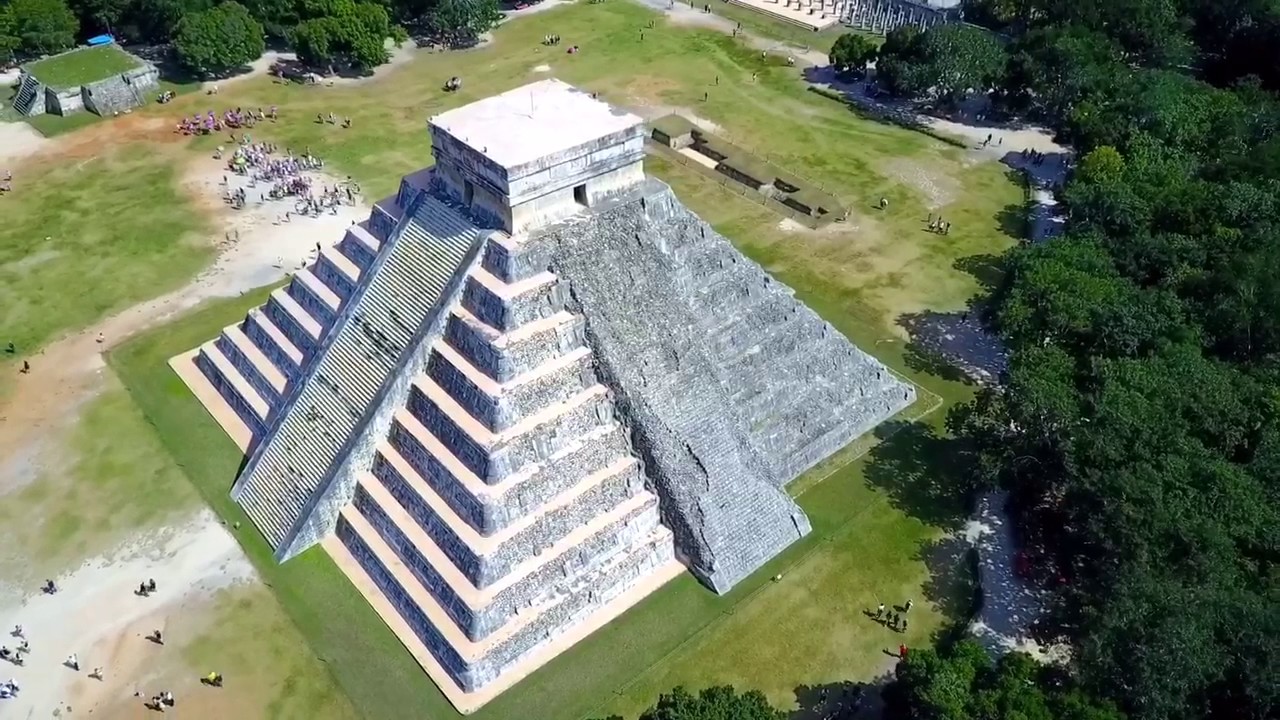 The area where the Temple of the Warriors, the Great Ball Court, and the Castle are located is called The Great Leveling. It consists of 5 or 6 hectares that were intentionally worked by collecting debris in layers, resting on top of the mother stone, to achieve a foundation on which to build their temples.

What was considered the center of Chichén Itzá changed its location over time? From a certain period, the great leveling was selected as the new site, coinciding in dates with the construction of Las Monjas. The platforms and structures around the great leveling were peripheral groups of the great primary center. 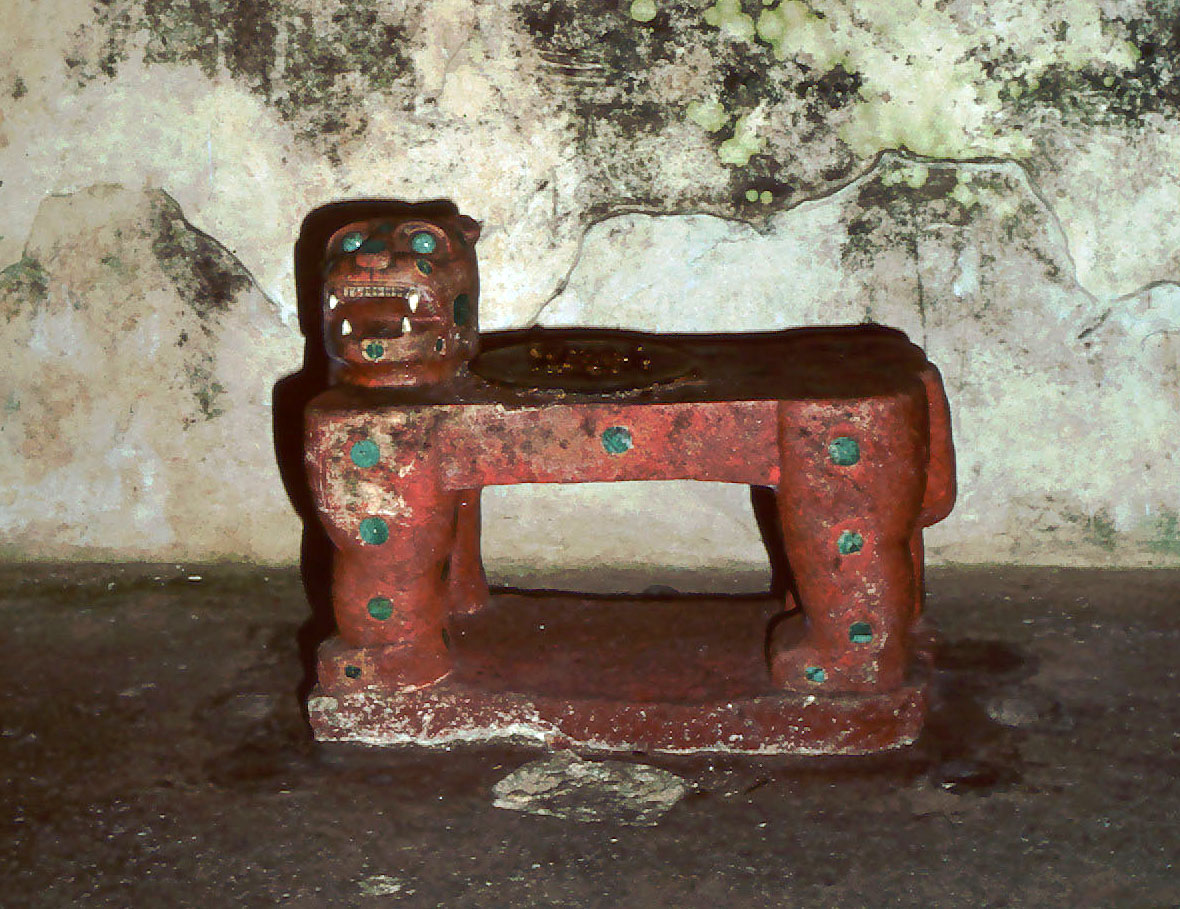 The substructure has stairs that lead to the upper part of the temple, where you can see the representation of a Chac-Mool and a jaguar throne adorned with jadeite. A curious fact about this jaguar-shaped throne is that Edward Thompson, a British archaeologist, tried to take it, but was arrested in Puerto Progreso with the piece about to be packed and sent abroad. It was on this throne where the sovereign sat, allowing him to see to the north and the esplanade in front of the temple; where, presumably, the captives of the wars were humiliated as a sacrifice.

The Maya zone was subject to cyclical droughts that implied food and belief crises; given that in the perception of the Maya, their deities "were failing".

It is possible to appreciate how the Itzaes had multiple cultures, given that they communicated messages from central Mexico with the Maya area through their iconography.

In certain constructions, it is possible to appreciate carved phalluses, which were related to fertility. When there was a crisis, new symbols were required; new gods, to finally harvest the fruits. 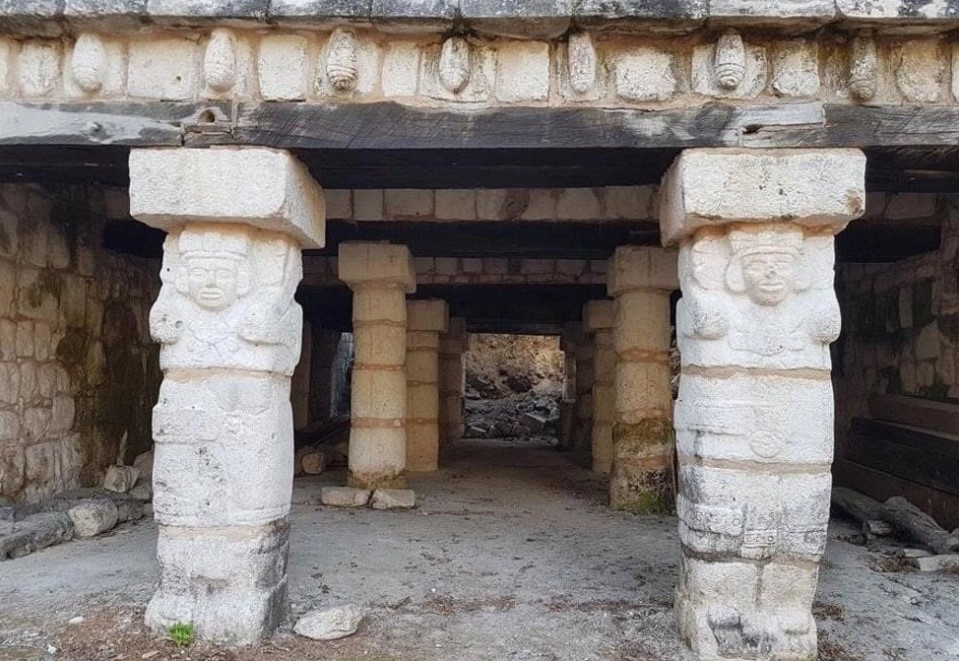 A significant change, beginning in 900, is the presence of Kukulcan. He is represented in El Gran Juego de Pelota and Las Monjas. In addition, the representation of the rain deity is reinforced. Tlaloc and Chaac are seen in several constructions. 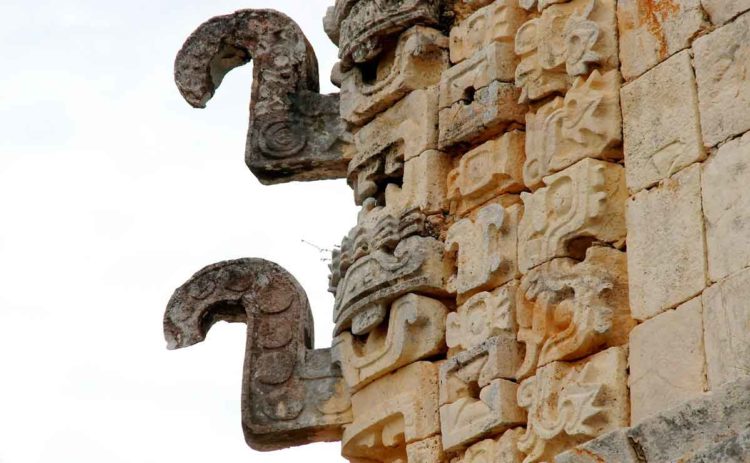 The Maya had traveled extensively and brought cultural elements from other places, for example, the religiously focused style. We can see how they managed to establish a new architectural style by incorporating external forms.

The Itzaes are a mystery. There are two theories. The great descent, which consists of a group of navigators that passed from Cozumel to Polé (currently Xcaret), to penetrate from there until arriving at Chichén; and the small descent, which explains how the Toltec leaders, only certain key positions, were established in Chichén. Already established, in the iconography of Chichén Itzá, we begin to see military chiefs, which were not seen before.

The Temple of the Warriors has a clear Toltec influence. However, the influence is not exclusively Toltec; there are other elements that come with the culture of central Mexico such as the Chac-Mool and the use of columns as in Tula. The Maya already used columns, but not in this form.

There is a Mixtec influence in the painting. Mayapan painting is very Mixtec in style.

The influence is mainly Toltec, but there are other symbols that travel with them.

When there were droughts and precarious times, it was easier for symbols from elsewhere to be accepted, precisely because "the gods were failing". When there is doubt, there is fear. Humans embrace what we can, and if contact with the Chontal Maya had revitalized the economy, why not embrace thought as well?

Temple of the Warriors

In this temple, each column has 4 glyphs. It represents the high military commanders advancing in the direction of the West, as the way in which they carried out presented the captives before the temple to humiliate and sacrifice them. This was the Maya version of the annihilation of the opposing people. However, in some cases, they were only humiliated and allowed to live.

Some of the glyphs in this temple are speaking. The earspools, the bar on the nose, and the headdress are elements originating in central Mexico.

Each column represents royal soldiers returning from war and bringing captives to present in front of the temple. When resting between the columns, it is possible to perceive the sensation of movement. Among all the glyphs, there are 4 women. It is believed that they were command voices. An example of this is how the mother of Janaab' Pakal, in Palenque, assumed power since her son was named sovereign at a very young age: 8 years old. 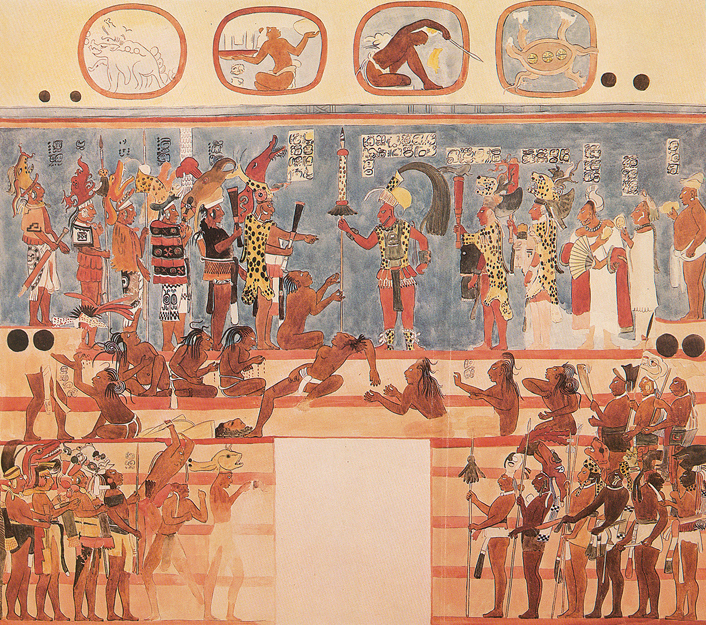 In the upper part of the Temple of the Warriors, there is an area covered by the last construction stage. It has much better preserved glyphs, still with the original Maya painting. Color, iconographically, is also a language: it is related to deities and directions. Red, for example, represents the east. The military chiefs were waiting for the captives to be humiliated in that area. 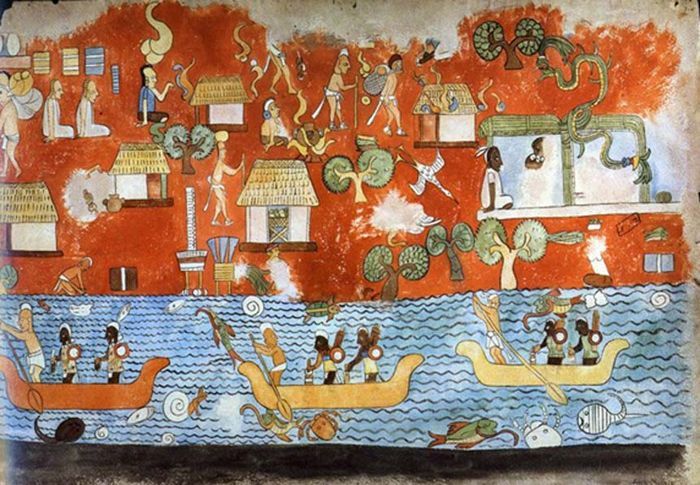 In the sacred cenote, men and women selected for sacrifice were thrown alive into the cenote. The Maya believed that they did not die even though they were no longer seen.

Perception of the Mayan people today

The Maya are often viewed with almost sacred awe or transcendent curiosity. One does not usually imagine a trivial, superficial, or ironic Maya. Beyond their symbols, their behavior as creatures.

Eric Thomposon once said, "these stones and symbols will never be appreciated by a mass culture." 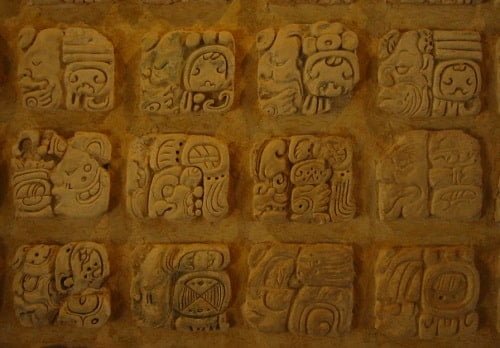 The Maya language is thought to be merely iconographic, but it is also phonetic. The Maya writings can only be truly deciphered when the Maya speakers learn the whole technique to decipher the hieroglyphs; at that moment the interpretation will change. The stones could even have double or triple meanings, taking into account that there are forms proper to each language that only those who have it as their mother tongue will be able to understand.