Archaeologists have discovered a wooden Maya canoe in southern Mexico, believed to be over 1,000 years old.

Measuring over 5ft (1.6m), it was found almost completely intact, submerged in a freshwater pool near the ruined Maya city of Chichen Itza.

Mexico's antiquities institute (Inah) says it may have been used to extract water or deposit ritual offers.

The rare find came during construction work on a new tourist railway known as the Maya Train.

In a statement, the Inah said archaeologists had also discovered ceramics, a ritual knife and painted murals of hands on a rockface in the pool, known as a cenote.

Experts from Paris's Sorbonne University have been helping with pin-pointing the canoe's exact age and type, the statement said. A 3D model of it would also be made to allow replicas to be made, and to facilitate further study, it added. 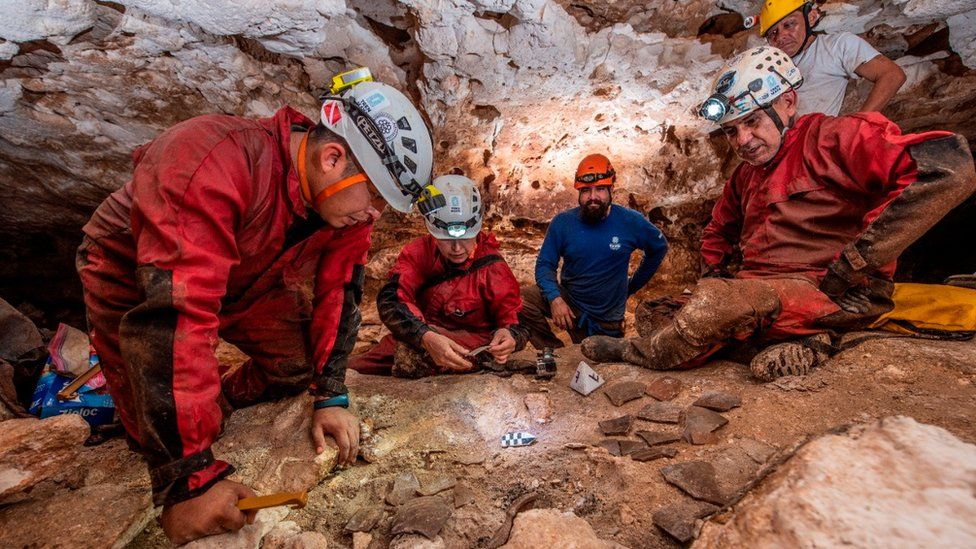 The Maya civilisation flourished before Spain conquered the region. In their time, the Mayas ruled large stretches of territory in what is now southern Mexico, Guatemala, Belize and Honduras.

The boat has been tentatively dated between 830-950 AD, towards the end of the Maya civilisation's golden age.

Around this period, the Mayas suffered a major political collapse, marked by the abandonment of cities dotted around modern-day Central America - leaving ruins of towering pyramids and other stone buildings.

No single theory for this collapse has been widely accepted, but it is believed a combination of internal warfare, drought and overpopulation may have been contributing factors.

The Maya Train is a multi-billion-dollar project, led by President Andrés Manuel López Obrador's government, which will run through five southern Mexican states.

Advocates have said the rail network will help to alleviate poverty in the region. But critics argue that it risks damaging local ecosystems and undiscovered sites of historic importance.