What to know some myths and legends of the Mayan Culture? Here we listed 3 curious facts that are part of the history of the Mayans. A glimpse through this article will enhance your experience the next time you visit Chichen Itza.

Popol Vuh is an ancient Mayan document that was based to invaluable knowledge from Mayan mythology and culture.

The pages contain the genesis according to Mayans. Writing in K'iche', a Mayan language, and by using the Latin alphabet with Spanish orthography.

Specialists believe it was written around the year 1554, and it contains the story of creation, stories about their gods, and the origin of the K'iche' community as well.

The original version was found in the 18th century in Chichicastenango, Guatemala. Parish priest, Francisco Ximenez rewrote the original text and then translated it into Spanish. Sadly, after many years, the original book was lost, but the copies made by the Priest are kept safe at The Newberry Library in Chicago.

In more recent years, in 2009, archaeologist Richard Hansen discovered two 8-meter-long panels carved in stucco from the pre-Classic times in El Mirador, Guatemala. Such carvings contain fragments of the Popol Vuh. The panels dated around 300 BCE.

The story is divided into four parts. First, it tells the story of how the gods created the world and humankind.

Secondly, it shares the birth and life of Hero Twins, Hunahpu and Xbalanque. The twins, later on, become the Sun and the Moon.

The third part narrates how the gods tried creating men out of wood and failed, then tried to make them out of different materials and didn’t succeed. Then they took corn and formed the first generation of men. It tells how they worship and how these men serve their gods as creators.

The fourth part of the book tells us about K’iche’ tribes, how they emerge, and their relationship with other tribes. 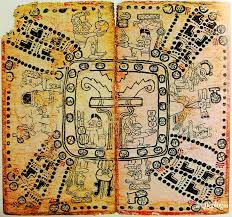 Until this day, La Ceiba is considered a divine tree between Mayan people and locals around the Yucatan Peninsula. People call it “The Tree of Life” because it connects the three cosmic levels of life. Its branches grow, and they seem to touch the sky where gods reside, its trunk is supposed to reference life on earth and they believe the roots weave the underworld. After creation, the gods noticed that there was nothing to protect the creation they had made. They created the protector “Chaneque”, who lives in the “Talogan”, the subterranean world where nature is prodigious. The Chaneque communicates with the earth through the tree, La Ceiba. This magnificent tree that fills the jungles is the channel between the mythical world and the earth.

Now, remember the Popol Vuh? It also tells the story of how the gods sowed Sacred Ceibas in the four directions of the cosmos. To the East, the Red Ceiba; to the West, the Black Ceiba; to the South the Yellow Ceiba; and to the North, the White Ceiba. Finally, they sowed a fifth Ceiba in the middle where all ways met. Legend says that the roots of the trees held the dead, while the trunk is the place where the living reside and the branches were home for the gods. But on the top of the tree was the origin of all the gods in the shape of a bird, the Celestial Quetzal.

Maybe you have visited Chichen Itza or perhaps another Mayan Archeological Site but didn’t notice that you have had the privilege of walking in a Sacbe.

These Mayan roads were sacred and they got their name after their color. Sac which in Mayan means “white” and be that means “road”. The Sacbe was white because it was covered with pulverized stone.

A short Sacbe was built to connect temples and other buildings inside a ceremonial center and other important cities in the Mayan Culture. Longer Saceb, or Sacbeob in plural, were made to connect cities. They normally were between 4 and 20 cm (1 ½  to 8 inches) wide and up to 300 km (200 miles) long.

The most famous Sacbe is the one in Chichen Itza, which connects the main building “El Castillo” with the Sacred Cenote.

The Sacbe helped the rise of their trading and communication with other cities. It also carried a religious and political meaning. Some kings and queens would order a Sacbe exclusively for them to get from one city to another. The Sacbe that leads to Izamal is believed to have been used as a very important road, maybe for kings and priests, because it led to the sanctuaries of Izamal.

Nowadays, Sacbeob has been invaded by the growth of the jungle so it’s hard to follow from site to site. You can still walk in one at Chichen Itza and other Archeological Sites.