The Mayan Civilization expanded further south than Mexico. Ruling over Center America, what we now know as Guatemala, El Salvador, Honduras, and Belize. Mayan Culture left a mark on the world and is now recognized as a contribution to the World Heritage. Even so, their legacy still stands firm in many shapes such as artifacts, legends, books, rituals, and the most astonishing ones, the Mayan Ruins.

The Mayan Ruins of Xunantunich are just as stunning as any other Mayan monument. Xunantunich deserves its own spotlight. Even if the site is not located in Mexico, it’s important for everyone visiting Mayan Archaeological Sites to know how big and meaningful their extent was.

Xunantunich means “maiden of the rock” or “stone woman” in Maya, and is located on the western part of Belize along the border with Guatemala. Follow the Western Highway across the river from the village of San Jose Succotz. Xunantunich is set within a tropical forest preserve with a compact core center. This site is less than one mile from the rapids of the Mopan River, so you’ll need to take a ferry to get there. If you could only imagine the view!

Xunantunich is a Classic Period  (200-900 CE) ceremonial center. The core occupies only 300 square meters but the periphery covers several square kilometers. As many Mayan Ruins are built, on the main palace building is an astronomical carved frieze.

The Legend behind the Ruins

Following the meaning of "Xunantunich", it derives from the Mayan language and means “Stone Woman.” The local legend holds that around the end of the 1800s, a gentleman from the village of San Jose Succotz in Belize went hunting close to the site. Walking by the base of the Castillo, he was struck by the appearance of a beautiful statuesque Maya maiden, dressed in traditional “huipil”, and dazzling in the rays of the rising sun. The woman stood motionless by the mouth of a cave that extended beneath the large structure. Stricken by her appearance, the man threw his gun aside and ran downhill to the village. After recounting his tale several villagers led by their native priest returned to the site. Arriving at the large mound they found the mouth of the tunnel, but the stone maiden had disappeared. Thereafter locals claim that the woman has appeared to several others but none have been able to follow her into the cavern.

As mentioned, the Mayan Ruins of Xunantunich are not located in Mexico but in Belize. The site is easily reached from Belize City or Orange Walk by the Western Highway to San Ignacio. From there it is about eight miles to San Jose Sucozt. To enter the site the river needs to be crossed by means of a whimsical, hand-operated cable ferry. 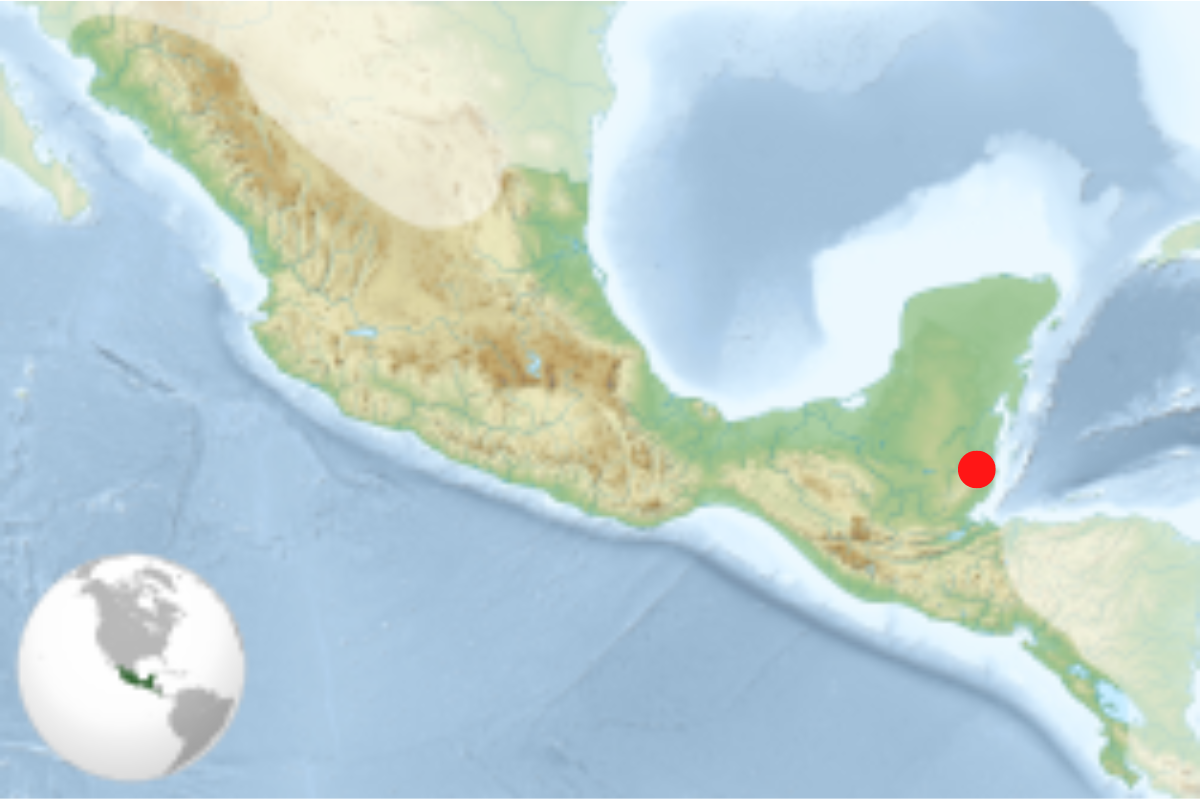 Xunantunich was first explored in the 1800s by Dr. Thomas Gann a British medical officer. The first recorded photograph of the site was taken in 1904 and displayed in the Peabody Museum of Archaeology, in Cambridge, Massachusetts, for many years. After this, activities at the site were abandoned until 1924, with the return of Gann. Records show that on his second visit, he unearthed many Maya treasures, history of which have been lost and the whereabouts unknown. It is believed and quite possible that many museums and private collectors of Maya Artifacts are displaying these items, with no idea of their origin.

The center of Xunantunich sits on an artificially leveled limestone ridge that stands almost 183 meters above sea level. From this core area, the site radiates outward, encompassing settlements that extend for several square kilometers. The epicenter consists of four major architectural groups. The most prominent of these is Group A, which is dominated by the 40-meter tall Structure A6 or “El Castillo”. Often misinterpreted as the primary temple of the site, this massive structure is actually a large multi-complex building that served as a dwelling, shrine, and administrative hub for the elite rulers of the center. The eastern and western summits of El Castillo have large stucco friezes with carved elements that represent astronomical symbols, the sun god, moon, and Venus.

In comparison to other neighboring sites, the history of the Maya at Xunantunich is relatively short. Early Belize Maya settlers may have established a small village at the site during the Middle Preclassic (600-300 BC) period, but the ancient city, as we know it, rose to prominence and declined between AD 700 to 1000. This rather late development is unusual because it indicates that while most other cities in the region were waning during the troubled Terminal Classic period (AD 800-900), the fortunes of Xunantunich were on the rise.