Here's everything you need to know about Cenotes

With 39 340 km2, the Yucatan Peninsula holds an extensive variety of flora and fauna. And within that, in Yucatan, you can find the most unique hidden places called cenotes. The number of cenotes in the state of Yucatan is between 7,000 and 8,000. Unbelievable right!? And there are records of at least 2,400 interconnected cenotes under the ground.

So, you want to know more about cenotes? Visit Yucatan, and keep on reading and find out everything you need to know about Cenotes.

What is a cenote?

The term cenote (from Maya ts'ono'ot or d'zonot, "cavern with water reservoir") refers to any subway space with water, with the only condition that it is open to the outside to some degree.

Despite its historical and biological relevance, little is really known about one of the most complex aquifer systems in the country. Regarding what a cenote is, what its structure is, and what species can be found inside it, this is all you need to know. 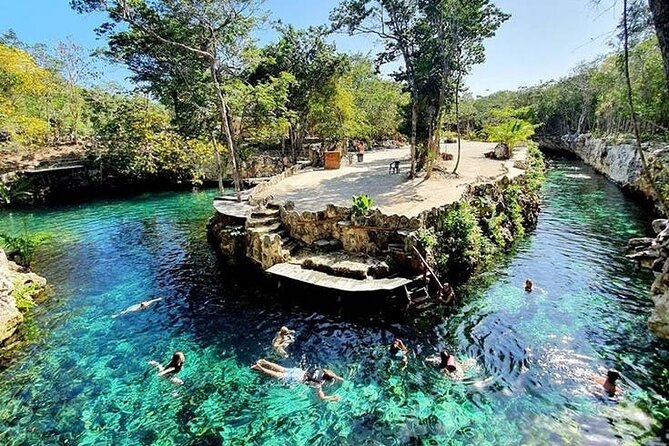 The most important feature of the peninsula's topography is the cenotes. These are concentrated in the northern part, along an imaginary line located between Tulum, Quintana Roo, and Campeche, and diminish towards the south of the peninsula. The karst rock is characterized by its high permeability and a hydraulic gradient of almost zero; water of meteoric origin infiltrates and accumulates in the subsoil, forming a lens the subsoil, forming a thin freshwater lens that floats above saline water over a denser, saline water mass, which originates from natural marine intrusion. The contact between the two water masses, fresh and marine, forms a mixing zone or halocline, which together form an important geological component of the aquifer. The freshwater lens is the only source of freshwater in the Yucatan Peninsula since prehistoric times, renewable only by seasonal rainfall.

How are cenotes formed?

So how did cenotes manage to exist? Well, actually, heavy rainfall in the Yucatan Peninsula unlocks the limestone rock and, over time, it generates a system of subway caverns.

Although cenotes are fundamental ecosystems in southeastern Mexico, biologists from the Department of Ecology of the Autonomous University of Yucatan (UADY) recognize that they are "only a partially known resource".

UADY scientists assure that all these bodies of water are intercommunicated with each other. Therefore, the damage inflicted on one impacts on the others, and thus, on the balance of the other ecosystems of the Yucatan Peninsula.

What did cenotes mean for the Mayan Civilization?

In ancient times, they were considered portals to the kingdom of Chaac, the Maya god of rain and life. Although, today, cenotes are threatened by the mega-projects promoted by the state agenda.

Throughout the history of civilizations in this region of the country, they have represented a spiritual link with the earth and the universe. Particularly in the Mayan way of understanding the world.

At the height of the Maya civilization, cenotes were understood as portals to the underworld. Therefore, these magical passages were also the stage for multiple mortuary rituals and sacred sacrifices. Entering the maw of a cenote, therefore, implied a spiritual connection with the land, water, and local fauna.

Mayas used to make special ceremonies around the cenotes, giving offerings and different rituals according to their gods.

Which animals live in cenotes?

"Their waters, exposed to a greater or lesser degree to the prevailing environmental conditions of the peninsula, provide a peculiar environment in which unique forms of life have developed,"

According to research and biological records that exist of the fauna in the cenotes, the animals that inhabit these spaces are mainly fish and crustaceans. However, a wide diversity of aquatic plants can also be found, which are nourished by limestone sediment.

Likewise, the life that inhabits a cenote depends on its age and morphology. They mainly fall into the following categories:

An interesting fact to know the age stage of time a cenote has is that the oldest ones are completely exposed, while the youngest ones have the dome almost intact. Either way, regardless of when this geological structure was created, cenotes are interconnected. Eventually, they also flow into the sea by filtrating the water through miles underground.

How can we take care of cenotes?

The approximate number of cenotes in the peninsula has not been estimated given the existing dynamics in their formation. The number considered in the state of Yucatan ranges from 7,000 to 8,000 cenotes; forest cover has made it more difficult to calculate for the states of Campeche and Quintana Roo.

So far, there are at least 2,400 such formations registered in the Yucatan Peninsula. Megaprojects such as the Mayan Train and massive hotel infrastructure not only harm the ecosystem but also disrupt the mystical connection that the native peoples have with these spaces even today.

Irresponsible tourism, the use of sunscreen, sewage, and seepage of construction materials are among the main threats to the cenotes in Mexico. The main problem lies in the fact that damage suffered by one reverberates to the others. Thus, one of the most important aquifer systems in the country has been diminished.