Tourist traffic at the archaeological site of Chichen Itza causes cities like Valladolid and Mérida to become tourist centers. And even more, a route to find the most exquisite dishes in the region. One factor that makes tourist travel possible is undoubtedly gastronomy. The traditional cuisine of all of Mexico is a living cultural manifestation. Lucky you, "La Ruta de las Tías" or "The Aunties Route", is one of the most famous culinary tours in the region and is visited by many as they go to Chichen Itza or Valladolid. As a Gastronomic Tour to Chichen Itza, we tell you about La Ruta de las Tías and their signature dish: Poc Chuc.

Whether you go from Merida to Cancun, from Cancun to Merida, or if you travel to Valladolid, one of the obligatory stops will always be to eat Poc Chuc with the famous Tia de Kaua.

The smell of delicious pork meat and handmade tortillas will reach you when you arrive at this town, located between Chichen Itza and Valladolid, on the free road to Cancun. Located in the small town of Tikuch, Yucatan, the small community of Kaua has 10 traditional restaurants that cook poc chuc, a pre-Hispanic stew based on pork, which identifies the place that guides and visitors have called "La Ruta de las Tías", part of the gastronomic route to the Mexican ruins of Chichen Itza.

In view of this offer, thousands of tourists traveling from Cancun, the Riviera Maya, or Tulum to Chichen Itza pass through the road that connects Valladolid with Kaua, a town divided by the Cancun-Merida federal highway.

It is transversal tourism, not only those who come from outside to eat well but all segments if not all those who come for work, family, or cultural trips. It is a segment that distributes inclusive and sustainable trade, benefiting traders and producers in the region. 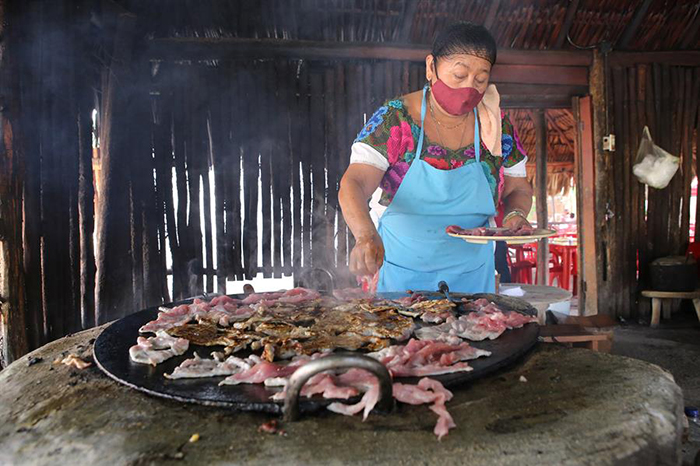 This clandestine route to Chichen Itza brings many locals and tourists to the restaurants even if they have to wait for quite a while, especially on weekends. People wait up to an hour to taste handmade tortillas, meat, and homemade sauces.

For years, there was a rivalry between the kitchens and the founders of the restaurant "La Tia Kaua". Visitors would end up so fascinated by all the dishes, that they themselves chose to call it a tie and named it "La Ruta de las Tías". This has ended up being a great opportunity that has turned businesses into agricultural producers.

But despite the debates, there is the woman behind the tradition. Mrs. Kaua is still at the helm of her kitchen, preparing more than 10 kg of beans and helping to prepare and supervise the tortillas and dishes.

This place has become an iconic place and a must-stop when leaving the ruins of Chichen Itza. As we mentioned, only 10 minutes from Valladolid, and one hour from Chichen, it is the ideal place to go to try regional food.

Yucatecan gastronomy has a different flavor from the rest of Mexico, it is the result of the cultural syncretism that took place in this land between Mayas and Spaniards, and constitutes one of the main references of the tourist offer of the state. The unique combination of condiments and spices such as pumpkin seeds, oregano, red onion, sour orange, sweet chile, lime, achiote, xcatic chile, habanero chile, chile max, and cilantro, give Yucatán's food its special flavor.

Poc chuc or pok chuk bak' is charcoal-grilled meat. There are some historians who believe that the Maya made poc chuc with peccary meat, roasted and salted over hot stones (comal). And that it was very different from the one we know today, or at least from the most modern recipes. Others attribute the creation of this dish to the end of the 19th century or the beginning of the 20th century.

The truth is that with the arrival of the Spaniards, pork was introduced and this is when the stew began to take on the form we know it today. After the conquest, most of the humble people of the countryside had the need to salt the meat for its preservation and to cook with wood and charcoal. Therefore, it would be common and normal in many of these homes to cut a piece of salted meat and roast it over the coals, accompanying it with a dish of beans, the "bu'ul" or "kabax", which could never be missing in the home, no matter how modest it might be. In the beginning, this stew consisted of a piece of salted pork roasted over the coals, accompanied by half a sour orange and a sauce of habanero chili and tomatoes (chiltomate).

In spite of the chiltomate, a new sauce was added to the stew based on roasted purple onions (poc-chuc) chopped and sprinkled with sour orange juice and a little vinegar. And if we count precisely these other ingredients (sour orange, onions, in addition to the pork) then we can affirm that the dish was totally modified after the conquest.

There're many signature dishes, it's not easy picking just one to represent the Yucatan Peninsula. Still, you cannot leave without trying something new!