The discovery of the new Archaeological Site has been amazing news for everyone but especially for Mayan Civilization! The new city goes by the name of Xiol, which means “spirit of man”. Such a poetic name for a city that refused to be forgotten. Archaeologists estimate that 4,000 people lived and developed at this site.

According to researchers, Xiol was developed in the late classic period of Mayan History. Between 600 and 900 a.d, taking over 3 km of the area, Xiol was founded. Archaeological reconstruction at Xiol was mostly completed just before the outbreak of the pandemic, so people are just now starting to discover its wonders.

How it was found

Thanks to investors, restoration processes were fast. Research started in 2015 when archaeologists were called in to investigate a construction in Sky Park Industrial Park. In the same year, the INAH called the discovery official and construction was suspended. It turned out that under the first layers of dirt, there were structures of an ancient civilization, commonly referred to as the Puuc style.

The city is located about 10 km to the east of the city of Merida. This helps identify the architecture and notice similarities with the Ruta Puuc. The specialist incharge of the Instituto Nacional de Antropología e Historia (INAH), José Arturo Chab Cárdenas, agreed to open the site to the public wihth free guided tours so people may know this amazing discovery.

"Among the constructive ones are the masonry walls and vaults with almost square and finely carved stone cladding. The core of stone and mortar that forms the walls and vaults allows the ashlars to be removed without causing a structural defect," writes the specialist in Arqueología Mexicana.

The core of Xiol’s ceremonial center is made up of five structures. The largest and most imposing of these is a complex made up of a ceremonial platform sitting next to a small pyramid-like structure. Both of these structures that make up Xiol’s largest architectural complex bear evidence of ceremonial use and the remains of stone altars.

Directly across from the previously described complex, and closest to the highway, lay a structure leading towards a small geological opening, which turns out to be a cenote.

It is interesting to note that although the Puuc influence at Xiol is undeniable, one of the Puuc styles defining characteristics appears to be absent — this being Chaac rain god masks. This is likely due to the natural abundance of water in the area as opposed to the Puuc zone, which is much more reliant on rain. Another similar residential structure, also gated off sits a few hundred meters to the north of the main ceremonial center. Surrounding this structure it is also possible to observe several stone tools including metates used to process corn

."Apparently the obsidian elements come from the region of Guatemala, the shells and other elements of this marine material could come from the northern beaches of Yucatan or Campeche," says Cruz.

One of the owners of the land, Mauricio Montalvo, emphasizes the importance of the discovery, "first we saw an enormous stone and as the excavations were made, enormous buildings were emerging"..."It was incredible, then we notified INAH and later we had to modify the original project, because for our company it is more important to preserve the Mayan legacy".

The archaeologist Peraza Lopez explains that this type of building that corresponds to the Puuc style is only found in archaeological zones located to the south of Yucatan, although some buildings in Chichen Itza, Dzibilchaltun, and the Historic Center of Merida show this type of the influence.

Archaeologist Peraza states that they found small rooms "where people lived and workshops where they made their work tools for the construction of buildings".

There are few such findings, because fragments of the stucco that the Maya used to decorate and cover the stones, similar to those found in the buildings of the historic center of Merida, are observed.

To this day, there have been found 12 restored structures, 76 foundations, and a large plaza. Archaeologists Carlos Peraza Lope and Wilberth Cruz Alvarado also rescued 15 buried adult and child bodies, 38 funerary deposits, and stone heads. Vessels and jewelry were also found, along with some tools that were probably used for hunting or construction. 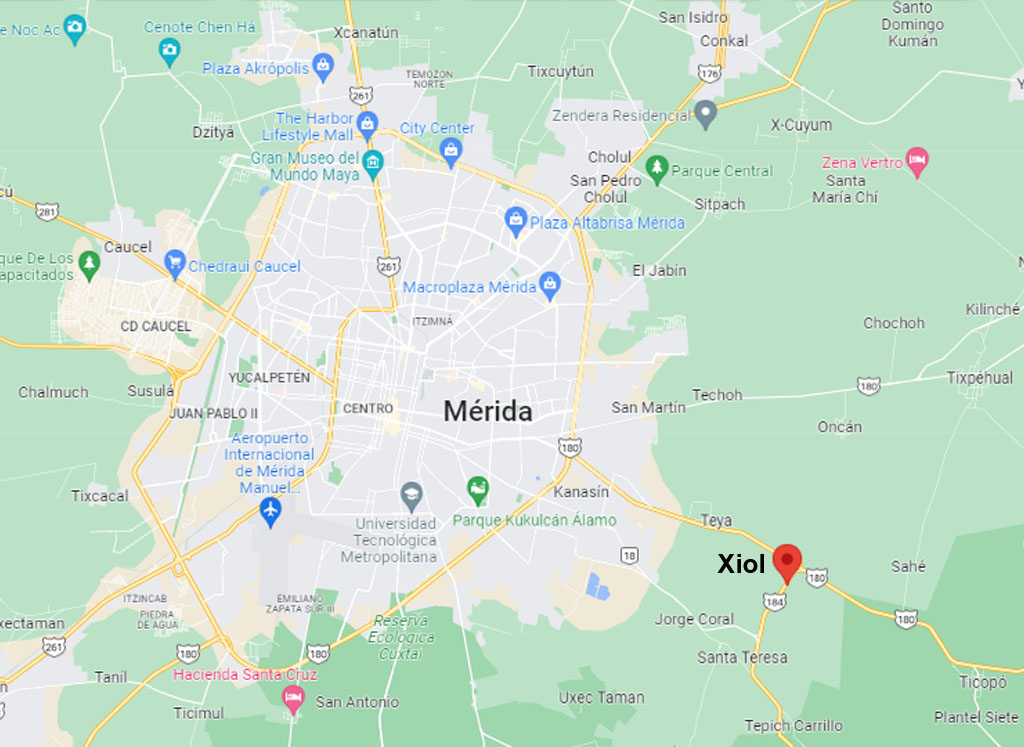